The Story Behind Zapf Chancery 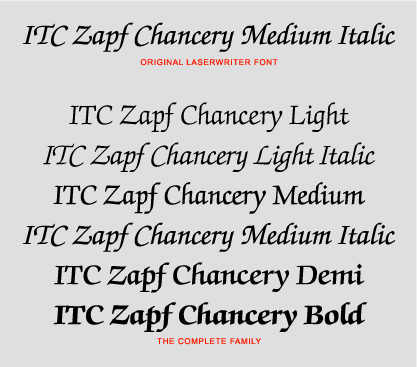 The ITC Zapf Chancery® typeface has been seen by just about everyone who uses a personal computer. In particular, one member of the family – Medium Italic – has been selected (or not) by millions of designers and non-designers alike. In the mid-’80s, ITC Zapf Chancery Medium Italic was chosen as one of the original Apple LaserWriter core font set. Years later, it became part of both the Mac and Windows OS. It has become one of the most commonly used – and one of the most widely misused – typefaces of our day.

What’s the story behind this typeface designed by Hermann Zapf, one of the most well-known and respected contemporary typeface designers? Allan Haley, Director of Words and Letters for Monotype Imaging, was Director of Marketing for International Typeface Corporation (ITC) when ITC Zapf Chancery was licensed to Apple. I asked him to jog his memory and tell us how it came to pass. Read on…

One Response to The Story Behind Zapf Chancery